Silver and Gold Have I None 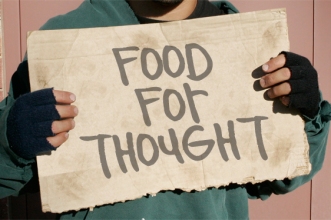 I am, quite often, asked what the Christ-like response should be when approached by someone asking for money.  I’m asked because my profession by day involves working with homeless and/or financially unstable individuals.  My response to these things tends to often disagree with the typical “social worker” view, settled into the heart by book knowledge and sometimes hardened by years of experience.

Let’s take the scenario where we encounter men/women standing at the busy intersections, with signs asking for money, waiting for vehicles to be forced to stop at the light or sign. There are typically 2 diametrically opposed responses for the driver seeing someone “begging for alms”. The first: <rolling up the window and looking straight ahead as if they won’t see> “Don’t give them any money. They’ll spend it on alcohol or drugs.” or “I don’t have any money. This feels awkward.” The second: <rolling down the window. clink. clink.> “Have a nice day.” <driving on, feeling accomplished/rewarded>.

Neither is a wrong… or right… response. Neither can be fairly judged by someone else as proper or improper. The reason for this is that one cannot judge the motive of the heart except the driver themselves.

However, let’s look at how the apostles responded in a parallel situation.

Acts 3:1-10 Now Peter and John were going up into the temple at the hour of prayer, being the ninth hour. 2 And a certain man that was lame from his mother’s womb was carried, whom they laid daily at the door of the temple which is called Beautiful, to ask alms of them that entered into the temple; 3 who seeing Peter and John about to go into the temple, asked to receive an alms. 4 And Peter, fastening his eyes upon him, with John, said, Look on us. 5 And he gave heed unto them, expecting to receive something from them. 6 But Peter said, Silver and gold have I none; but what I have, that give I thee. In the name of Jesus Christ of Nazareth, walk. 7 And he took him by the right hand, and raised him up: and immediately his feet and his ankle-bones received strength. 8 And leaping up, he stood, and began to walk; and he entered with them into the temple, walking, and leaping, and praising God. 9 And all the people saw him walking and praising God: 10 and they took knowledge of him, that it was he that sat for alms at the Beautiful Gate of the temple; and they were filled with wonder and amazement at that which had happened unto him.

When the apostles were going into the temple they were confronted by a man who, daily, sat outside the gates and begged for money. Peter looked at the man and John told the man to look up – to look at them… to make eye contact with them. Requiring eye contact, or making eye contact with someone in this type of situation, is to show them respect.  To give them dignity. So the apostles’ first response was to treat the man with respect and dignify his worth as one created by God, their Father.

Scripture says that the man looked back at them expecting for them to give him money.  But Peter said “I don’t have any silver or gold.  However, what I do have I will give you. In the name of Jesus Christ, walk”. And the man’s legs were healed and he ran, jumping and leaping, with the disciples into the temple – all while thanking and praising God.

But Peter was looking beyond the beggar.  He looked beyond the request for money.  He saw past the band-aid that would temporarily cover a gaping wound in the man’s life.  Peter saw the true wound.  The true need.  The root cause of the man’s true poverty. Peter saw a disabled man with a wounded soul.  And THIS is what Peter responded to. Out of felt compassion for the man, Peter and John looked deeply at the man and recognized that giving him money would not, ultimately, help the man.  He’d been receiving money for years – yet was still crippled, was still begging, was still broken.  And so Peter offered him, instead, hope and healing.

Back to our response.  I can’t tell anyone how to respond to someone who they see asking for money.  One’s response to these situations is, entirely, between them and their God.  However, based on the apostles’ response, I can offer these words…

Outside of all else our heart should be moved with compassion for the one who is beaten down and broken in such a way that they must rely on others, or “the system”, to meet their temporal needs.  The Spirit of God on the inside of us should be pained when one of God’s masterpieces finds themselves in a situation where “begging for alms” is how they have come to survive. Our first response should be compassion. Our motivation, whatever our response, MUST be compassion when we see one who is broken and “poor” in spirit. (Luke 10:29-37)

Then, our response must be coupled with wisdom and discernment from the Father.  Like the man at the Gate Beautiful, quite often the true need has nothing to do with giving alms or money.  We may be approached by one who may, indeed, have an immediate need for sustenance of some kind.  If we have the ability to meet this need – whether we offer alms or not – that is between ourselves and God alone. However, the question begs to be asked. Will giving money satisfy our own immediate need for justification and self-satisfaction? Will giving money ultimately help?  Or will it add to the band-aids that have been applied by so many before us, to poorly cover a much deeper wound?

If we, as Christ-followers, simply apply band-aids by giving money to everyone who appears to need it, are we following the example of Christ and His apostles? Jesus, Himself, encountered people with immediate, “felt” needs constantly.  He met their needs, however then He shared hope with them… and CHALLENGED them to live life, to do life, differently. (Note: there are no accounts of Jesus giving money to meet an immediate need, but instead healing of all disease, delivering from oppression, etc.) Even when Christ fed the 3,000 and the 5,000 it was to provide sustenance in order that they could continue to receive His teachings after a long day.

In the story of Peter and John, they reached beyond money and alms into the real, soul and spirit needs of the man. They offered more than a gift of money, but a gift of healing, restoration, and hope. Not only could the man walk after receiving the true gift that Peter and John offered, but he ran, danced, rejoiced, and celebrated.  From a beaten and broken man with wounded pride, unable to lift his eyes to a smiling, leaping, whooping and hollering individual who infected other people with his joy.  All because Peter and John saw beyond the immediate, temporal, perceived need and responded with respect and dignity, true compassion, and wisdom.

For the person who has adjusted to living life relying on the generous – or guilt-ridden – gifts of others, money may seem to be what will solve their problems.  Money, or alms, may seem to be what they need most.  It may seem to be what will satisfy their “felt need”.  However, if we fasten our eyes upon them, and our heart is moved with compassion and wisdom from our Father, then we will recognize that this is a superficial fix to a deeper need.  Our giving will not just be about handing out a few dollars.  We will go beyond money and we will remove the band-aids to address the oozing, gaping wound that is the root cause of their poverty.  We will offer them dignity.  We will restore their pride. We will offer the hope that is in us, addressing the deeper need, and a extend a hand with a challenge to do differently and “rise up and walk”… willing to walk beside them when the challenge is accepted.

So what do ya think? Cancel reply